Healing Through the Lyrics: Amariah’s Journey

What begins as anxious curiosity grows into excitement when students embark upon the creative process.

During our Shelter night program on June 16th, 2015, a 16 year-old girl named Amariah arrived at the David’s Harp facility for the first time.  After checking herself into the shelter that night, she was noticeably nervous as she walked though the doors accompanied by her new found friends and Taylor, the San Diego Youth Services Storefront Emergency Shelter’s staff member. Her nervousness turned into cautious excitement after DHF Director Brandon Steppe greeted her with a high five and told her that she’d be rapping tonight in the studio.

“Oh, it’s going DOWN!” Amariah exclaimed as she turned the corner into the studio and saw the recording console. She quickly rifled through her backpack and pulled out a notebook of raps and poems. Seemingly forgetting her situation all together, she read over her notes a couple of times while other students recorded, stepped uncertainly in to the sound booth and recorded for the first time. 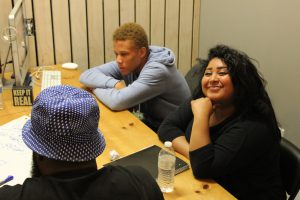 During the subsequent “Shelter Night” sessions, Amariah revised and eventually finished her song. But she was not finished in the studio!

Driven to see Amariah develop her talent further, Brandon spoke with the Director of Storefront Emergency Shelter, Sarah Merrill and the two came up with a week-long program to get Amariah back in the studio.

We called upon talented student music producers from DHF’s “The Project” program to work closely with Amariah to craft a musical composition to support her rhythmic poetry.  Through high moments and low moments, frustration and triumph, the students rallied together to help breathe life into Amariah’s dream.  By the end of the week, the songs were created.  More importantly, Amariah walked out of the studio with a sense of accomplishment.  Her story is not done.  She is enrolled in our Fall class to continue to refine her skills and we look forward to the strides that she will make in the studio and in the classroom.

The song that Amariah created (which can be heard below) is the soundtrack of healing that started in her life, and it is our pleasure to share it with you.